I knew from the beginning of my Genre Studies class that I wanted to focus on young adult literature; however, with such a broad genre, I had to find a way of narrowing my focus.  Even though I chose a topic within YA Lit to investigate, I still ultimately had to choose a small sample of texts for my analysis.  This frustrated me; it felt disingenuous to make conclusions about a whole field of literature based on such a small sample.  I wondered, too, how much our sample choices really reflected the genres we were studying (especially, as we discussed, since we literary scholars tend to go for the texts which push the boundaries of genre).   Although I did find a method of text selection, my reading for the Digital Studies Colloquium provided me with a much more compelling option in the future: macroanalysis.

Macroanalysis, by Matt Jockers,  lays out a ‘big data’ approach to textual analysis, one that uses ‘distant reading’ (as Franco Moretti and Stephen Ramsay refer to it) in addition to the more traditional ‘close reading’ to come to conclusions about a large corpora of texts.  Jockers proposes that algorithmic tools such as concordances and topic modeling allow scholars to work not from example to generalization, but from the corpora as a whole when arriving at conclusions.  He is careful to note that such analysis still requires human interpretation–the computer merely acts as a gatherer of facts.  The benefit of using a computer to do the initial reading is that it “access[es] details that are otherwise unavailable, forgotten, ignored, or impossible to extract.  The information provided at this scale is different from that derived via close reading, but it is not of lesser or greater value to scholars for being such” (Jockers 27).  Jockers focuses mostly on the benefit of his approach to literary history, but he also lays out the case for its use in genre studies.

Among the list of the questions macroanalysis could answer, Jockers includes:

Each of these questions refers to a key element of genre studies.  The first question focuses more on the formal aspects of genre, (which most genre theorists aren’t concerned about, since they consider genre to be social action (a la Carolyn Miller)), but it can reveal information about rhetorical moves made by different scholars or groups of writers within a genre system.  For example, topic modeling might have revealed the same differences in male and female anthropologists’ writing that Risa Applegarth noted.

The second question looks at genre systems, as Charles Bazerman terms the way sets of genres work within the systems of human activity.  While this question still puts more emphasis on genre as a classification system, it does have the potential to reveal how genres are used either by different actors or to appropriately address a different rhetorical situation.  For example, if I consider young adult literature to be the genre, I could use macroanalysis to look at YA romance or YA fantasy as subgenres and compare their female subject positions to the genre as a whole.

The last question, while explicitly referring to literature, calls into question the metaphor of genre change as evolution.  Used most notably by Carolyn Miller (see her Genre 2012 Conference keynote video), the metaphor of genre change as evolution provides a framework for understanding variation in texts of a single genre, the replication of generic forms, and the function of the genre.  The problem with this metaphor, as classmate Audrey Farley pointed out, is that it implies that newer, ‘evolved’ texts are better, when they may not be as appropriate for the rhetorical situation as older approaches.  Macroanalysis is a much better way of tracing change in genre than the sampling method because it can take into account the entire genre, not just the self-selected texts that might make a historical trend more obvious than it really is in the corpus as a whole.

Like any methodology, macroanalysis does have limitations.  A big one for my focus of YA Lit is that it is very difficult to get texts still under copyright in a suitable form for data mining.  However, I could see the utility in using it to examine the plethora of reader reviews left on such public websites as Amazon or Goodreads as a method of analyzing reader reactions to the book.  A quick and dirty example of a word cloud based on some reviews of Stephenie Meyer’s Breaking Dawn from each of those sites appears below: 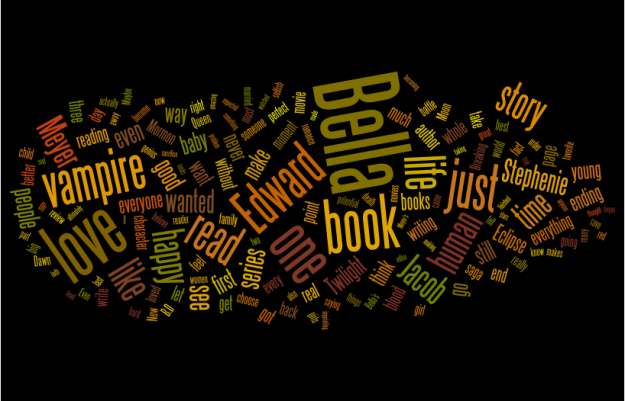 While the common stop-words such as character names and title words would need to be removed to get a more accurate picture, you can see that many of the words listed are associated with traditional female gender roles as wife and mother: “baby”, “child”, “family”, “loving”.  Contrasting these reviews with those of a YA book that has a different subject positioning (The Hunger Games, for example) could reveal what readers saw as the emphasis of gender roles in each book.

I think macroanalysis could also be a good way to confront stereotypes about YA Lit, especially the accusation that the genre is full of violence and sex.  It would be interesting to use topic modeling to see how much of it really is, compared to the texts people who try to get YA Lit banned think are appropriate for adolescents.

While I don’t have enough time to experiment with macroanalysis for my current semester projects, I look forward to being able to use it in the future, and seeing for myself what the benefits and complications of using this method are.